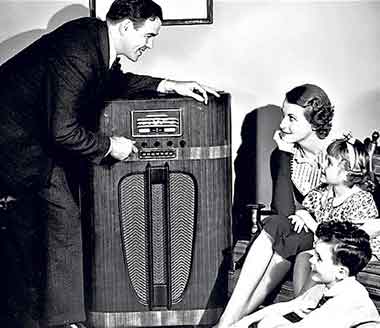 Welcome to Old Radio World! Here you will find some of the most popular radio programs of the 1930s, 1940s and 1950s. Before television, radio provided entertainment by presenting radio plays and programs of mystery, intrigue, and comedy. There was also news and soap operas.

If you are new to old time radio, have a look at how the sound men created the broadcasts with sound effects. The nine minute video, "Back of the Mike", begins with a child listening to the radio and his imagination is put on the screen. The camera then goes to a 1930s era radio sound studio where the program is originating. This video gives you an insightful look at how those intriguing and astonishing sounds were created.

A Canticle for Liebowitz Adventures By Morse Authors' Playhouse Bold Venture Campbell Playhouse Cathy and Elliott Lewis On Stage Dragnet Encore Theater Gang Busters Nightbeat Radio City Playhouse Terry and the Pirates The Adventures of Maisie The Adventures of the Thin Man The Black Museum The FBI in Peace and War The First Nighter Program The Lives Of Harry Lime The Price of Fear Wayside Theater Yours Truly, Johnny Dollar

2000 Plus Batman Blue Beetle Flash Gordon Frankenstein Journey to the Center of the Earth Mind Webs Omar, The Wizard Of Persia Planet Man Superman The Avenger The Falcon X Minus One